“A lot of students feel that school isn’t equipping them for life beyond school.”

20-year-old Jaiden Corfield is leading a youth programme for Ashoka and The Edge Foundation’s new capabilities for a new world programme, and has founded a mental health organisation for boys. He tells us why he is advocating for change in education and beyond

WHAT IS YOUR ROLE ON THE NEW CAPABILITIES FOR A NEW WORLD PROGRAMME?

We bring headteachers and young people together to help them create solutions for social change within the education system. Shaun McInerney, my colleague at Ashoka (see Are we giving young people the capabilities they need for life success?), is leading a programme with headteachers, where he’s taking them on a learning journey to reconnect with themselves, their school and young people.

I’m leading a programme where we’re taking young people on a journey to understand what changemaking and leadership mean. The aim is to help them connect with themselves as a student and leader so that they can work with their headteachers to create solutions that work well for their school.

HOW MANY YOUNG PEOPLE ARE YOU WORKING WITH?

I’m working with 21 students from eight schools in Greater Manchester. Each school nominated a maximum of four students and the 21 students, who are in years 8-12, were chosen from this list.

WHAT CHANGES DO YOUNG PEOPLE WANT TO SEE IN THEIR SCHOOLS?

Lots of things but the biggest issue is careers education. A lot of students feel that school isn’t equipping them for life beyond school. And there’s a clash because a lot of teachers believe they are doing that. Young people want more than the curriculum. They want to learn how to pay bills, what college is like, the differences between college and university, and what the options are if they don’t want to go to university.

Then there’s well-being. School can sometimes feel like a stressful place. The students I’m working with just want to know how to breathe during stressful periods and they don’t feel like school equips them to do that.

WHAT HAVE BEEN SOME OF THE OUTCOMES OF THE PROGRAMME SO FAR?

We’ve been working together for six months now and we’ve gone from not understanding a lot about leadership or changemaking to creating learning journeys with headteachers. Some young people now have weekly meetings with their school leaders where they’re discussing things they can change, like discrimination, and they feel a lot more confident engaging with teachers.

There has also been a shift in students’ mindsets. They initially saw themselves as representatives of their schools and therefore wanted to show it in the best light possible, but when you’re creating change, that’s not always the best way of approaching it. Now, the students focus on thinking about what needs to change within their school for their peers to feel they belong in school or within the education system.

WHAT ARE THE HIGHLIGHTS OF THIS PROGRAMME FOR YOU?

The biggest transformation for me has been seeing individuals, and the mutual understanding between teachers and students, really grow throughout this programme. Students and teachers understand each other a lot more. They understand that they both want to see changes within the education system, whereas, before, they were almost working against each other. Young people don’t think teachers want the same thing as them and teachers don’t think young people are ready or prepared to deal with a huge amount of change. 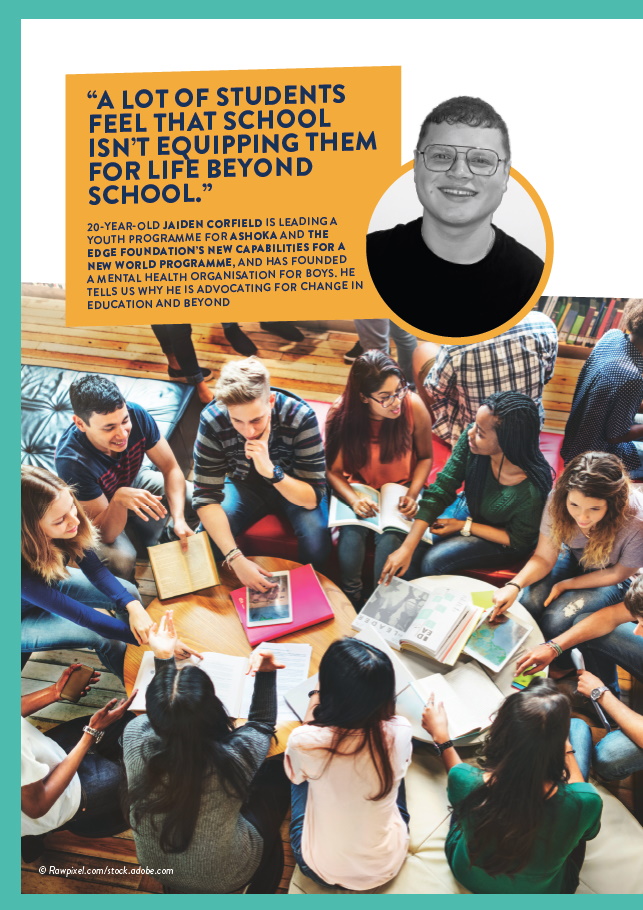 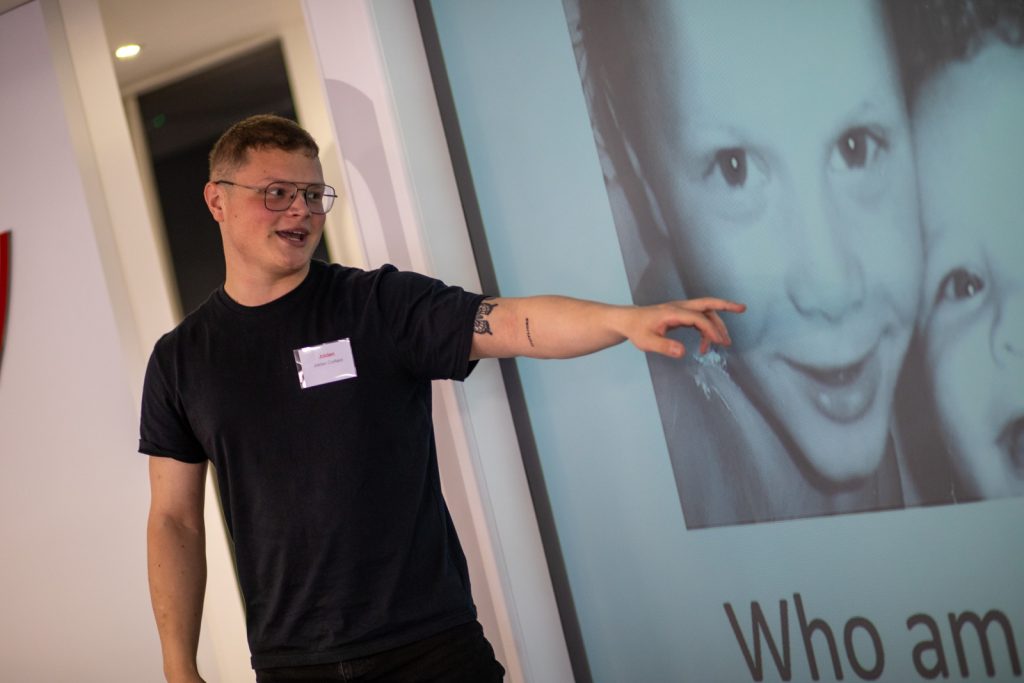 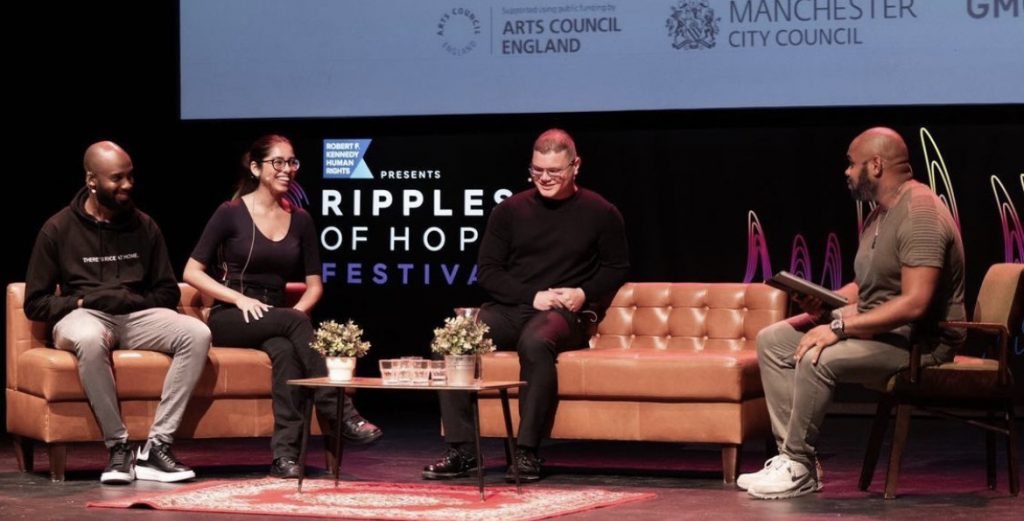 Jaiden on a panel at a Robert. F. Kennedy Human Rights Convention in 2021. Photo Credit: The Robert F. Kennedy Foundation 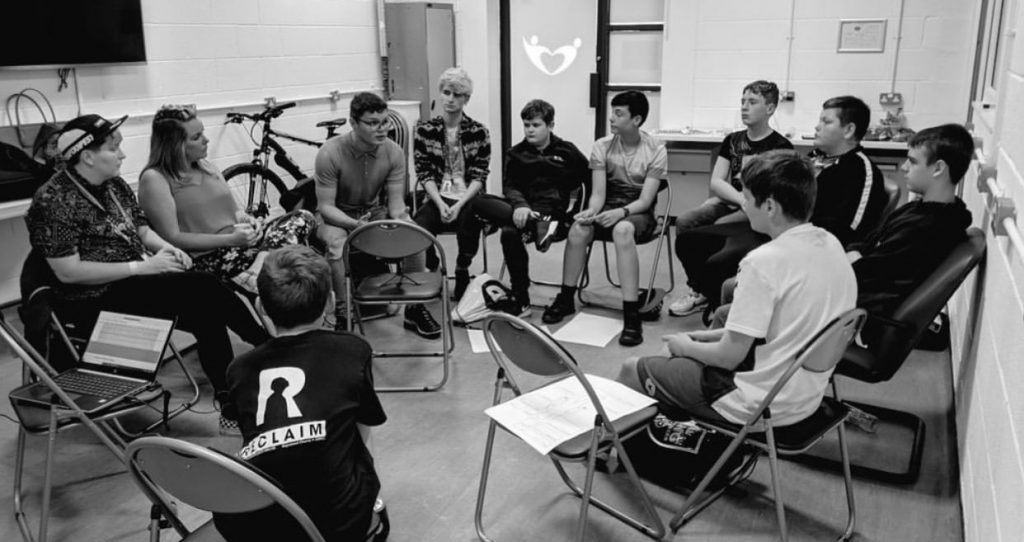 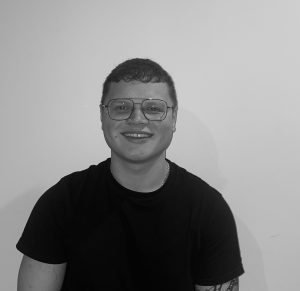 When I was 11 years old, I joined a youth group and started doing activism. From that, I went into campaigns and spent a few years trying to create as much change as I possibly could, mainly in education and amplifying the voices of working-class young people.

My route into activism started with an assembly at my school where they were talking about a summer school for young people that explored leadership. I wasn’t really bothered about the leadership part but there was going to be free food. I was like, if there’s free food, I’m there!

I grew up on the fifth most deprived estate in the UK. I became really engaged with the concept of leadership at the summer school because it wasn’t a concept we were familiar with on my estate.

A mentor introduced me to Ashoka and I’ve been involved with the organisation for two years now. Ashoka was looking to expand its reach in Greater Manchester with its Everyone a Changemaker movement. I joined as the first young co-leader.

I studied A-levels in politics, philosophy and sociology because I felt these subjects were a natural path for someone like me who is interested in social change. But if I had that time again, I would study things that don’t necessarily follow the trajectory of the traditional changemaker.

I would’ve liked to have studied arts subjects like fashion or graphic design but it didn’t feel like it would be accepted to have studied these subjects if I wanted to follow an academic path, or get into changemaking or social policy.

I went to university for one year and then dropped out. Sometimes, people think you have to do a higher education degree if you want to get on, but, for me, higher education is something you should really love. I was studying politics, philosophy and economics (PPE) during the COVID pandemic but I wasn’t enjoying university, so I decided to drop out to start up a mental health organisation called Outliers.

It was an incredible honour for me to have been selected for the Virgin Money Foundation Changemaker graduate programme. Virgin chose 10 young people to go on this journey – young people who were creating change in their communities – and brought them together to research and work on an idea they had pitched to Virgin.

I was able to use the £10,000 given to me by Virgin Money to start Outliers in Salford. They also provided us with mentoring. I started the Virgin Money Foundation programme very much a visionary, someone who had ideas for social change but didn’t necessarily know how to put them in place to make them happen. The mentoring team was great at helping me make things happen.

I paint a positive image of what it means to be me as an individual but there are definitely days when I don’t feel that positive, or when the social impact sector feels overwhelming and I’m burnt out.

I suffer from anxiety, and have done for the past 2-3 years, but more so in the last year. When it’s less severe, I’ll go for a walk or start doing the things I love, but there are days when it’s really severe and I’m bed-bound. For me, being able to recognise how I’m feeling, accepting it and sitting with it for while, is really helpful. When it’s more severe I’ll take the day off work and focus on relaxing.

One thing I wish I’d known when I was younger is that I’m capable. If I could tell young people one thing, it would be that if you have a vision or want something changed or want to be a leader, you’re definitely capable. It’s about believing in yourself and placing yourself in positions where you can seek and take advantage of opportunities when, or if, they arise

The best advice I’ve been given is from Kelly Davies at Ashoka. She always ends with the phrase ‘crack on’. Just do it and see what happens. If you fail, get back up, crack on again, and keep going. Those two words, crack on, are teaching me a lot about positive resilience.

JAIDEN TELLS US ABOUT HIS OUTLIERS PROJECT

Outliers works with boys aged 10-18 to explore masculinity, leadership and wellbeing. I did a dissertation on the evolution of masculinities at college for sociology and that’s when I really started to understand masculinity. It’s then I understood that young men – or our generation, as a whole, – are at a turning point with mental health and mental illness, and it’s kind of overwhelming.

I spent about six months talking to over 150 people from across the world, trying to learn as much as I could about working in the mental health and well-being sector. After I’d done the research, I registered Outliers as a charity, formed a group, joined a mentoring programme, and now it’s an organisation.

Outliers is launching in three areas: Salford, Rochdale and Bolton. Salford was known as the gun and gang capital of the UK for a very long time and, in the past couple of years, it’s had a 200% increase in youth violence and crime. However, Salford also has a really beautiful community and many of its young people are aching for opportunity. There’s a venue called the Salford Lads Club. Boys will go to the club to explore leadership, wellbeing and positive models of brotherhood. We encourage them to look at brotherhood in a different light and explore solutions to the challenges in their community.

In Rochdale and Bolton, we’ve been leading well-being sessions with young people in schools. We take different approaches in each area, depending on what we think young people need.

A lot of boys are new to the idea of leadership and believe it isn’t for them. The plan is to take them on a full journey of understanding themselves as a leader, someone who can have an idea for change, lead or form a team, build new approaches to that change and be able to lead towards it. We’ll guide them towards models of good leadership and bad leadership, and place them in positions where they can improve their public speaking, teamwork and planning skills.

I think everyone has the capability to be a leader, or can be taught to be a leader. I then think it’s down to you to decide which type of leader you wish to be.

Advisor for The Listening Fund
www.thelisteningfund.org