Climate change: young people striking from school see it for the life-threatening issue it is

Students around the world are walking out of school once more, as part of ongoing strikes to protest governments’ inaction on climate change. Since August 2018, tens of thousands of young people have taken part in strikes across Sweden, Switzerland, Belgium, Germany, Canada and Australia. The movement continues to grow, with fresh protests occurring in the UK and elsewhere.

Today’s young people are the first generation to have lived their entire lives under the threat of catastrophic climate change. They’re now positioned as future leaders, forced to take urgent action on an issue which older generations have lacked the political will, organisation and authority to address.

Speaking at the World Economic Forum in Davos in January, 16-year-old Swedish climate activist Greta Thunberg called on the young people of her generation “to hold the older generations accountable for the mess they have created, and expect us to live with”.

“We must hold the older generations accountable for the mess they have created. … and say to them you cannot continue risking our future like this.” Teen climate activist Greta Thunberg calls on young people to use their anger as activism. https://t.co/eB1UVf6Gmp pic.twitter.com/YTqCg5MRNy 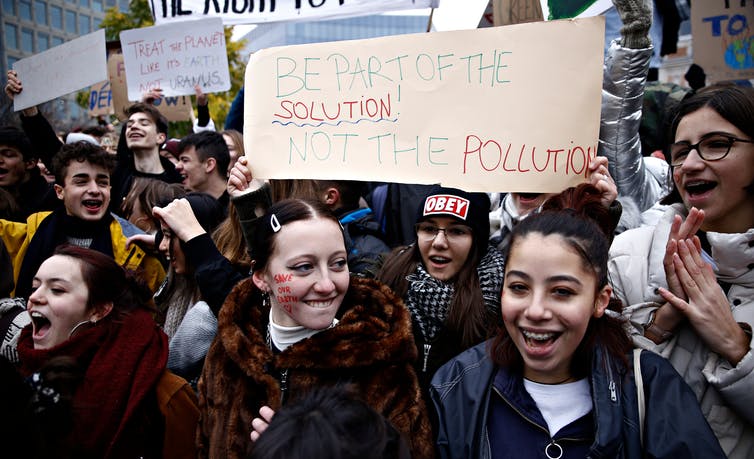 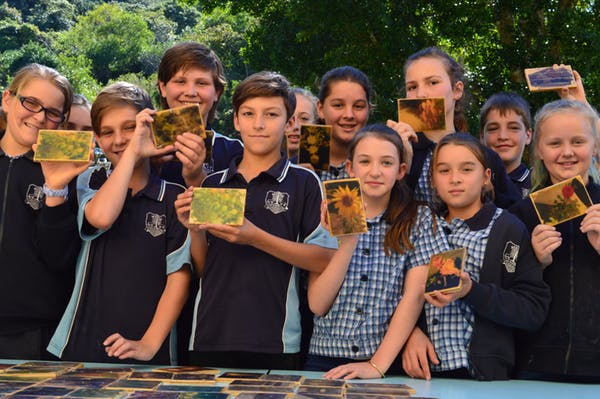 Making a statement.
Climate Change and Me., Author provided

During the school strikes, young people have emphasised their concerns about the Earth’s future. But the fact is, many children and young people are already living with the effects of global climate change, which include forced migration, food scarcity, drought, rising sea levels, extreme weather events and toxic contamination of water catchments.

Political debates about climate change manipulate environmental facts, values and concerns, which is contributing to a state of fear and anxiety among children and young people in many parts of the world. For example, neo-conservative and populist movements in the United States, Europe and Australia spread messages denying the scientific evidence for climate change, and challenging attempts to address it on moral, religious or political grounds. At the same time, young people are exposed to apocalyptic visions of the disastrous impacts of climate change through the internet, social media, literature and films.

As far back as 2007, an Australian study of children aged ten to 14 found that half were deeply concerned about climate change, while a quarter were worried that the world would end within their lifetimes. In spite of all the anxiety and divisiveness in the world today, the climate strikes reveal a growing international movement of young people, committed to political resistance and hope for a better future.

Political leaders have scolded young people for skipping school to strike. And while it’s true that education can and should help young people to engage with the environmental, social and political dimensions of climate change, our new review of academic literature from around the world suggests that this vital issue is rarely addressed with any depth, nuance or rigour in schools.

Another research project called Climate Change and Me, which ran from 2013 to 2017, helped to establish a platform for children and young people to express and connect their attitudes, awareness and understandings of climate change in New South Wales, Australia. We worked with 135 children and young people, aged nine to 14, and encouraged them to generate their own lines of anthropological and creative research.

Their responses ranged from ethnographic studies within their own communities, to artworks, photo-essays, science fiction stories, poetry and films. Through this project, we found that young people’s lives were deeply affected by climate change, and that they were politically and creatively motivated to take action. As one 11-year-old said, in an interview with one of their peers:

It’s quite scary, the effects of climate change are occurring now and it’s very devastating. It’s selfish and horrible how humans are causing animal and plant species to die.

This sense of a combined ethical and existential crisis was echoed in young people’s interviews, stories, poems and films over the course of the project. One ten-year-old envisioned a near future “in which humans fulfil every one of their selfish desires, a world that I would not want to live in”. Another created a photo-essay featuring felled trees in her local neighbourhood, with the caption:

We kill many things. We are malicious killers. We do not realise that we are destroying our homes and the homes of all other organisms.

Yet these dark perspectives were accompanied by expressions of empowerment and calls to action. A 12-year-old participant in the research argued:

The difference must begin with us. We must change our values and what we believe is important to us. We must make drastic changes to how we think and make choices about our everyday activities.

As one nine-year-old in our study simply put it, “only people who care can help”. Our study helped young people translate this sense of ethical care and responsibility into social actions, including a travelling exhibition viewed by over 10,000 people, and an interdisciplinary Climate Change Curriculum which has since been adopted by over 30 schools in Australia.

This contagious sense of young people caring and daring to stand up against climate inaction became one of the most salient and hopeful findings of the Climate Change and Me project. And now, we see this finding playing out on a larger scale: while climate change is darkening young people’s lives, along with their prospects for a liveable future, we see children and young people using powerful and creative tactics to claim a voice and a political platform in society, and confront the greatest challenge of our age.

This article is republished from The Conversation under a Creative Commons license.

Check out our articles on climate change: