How to overcome a fear of maths 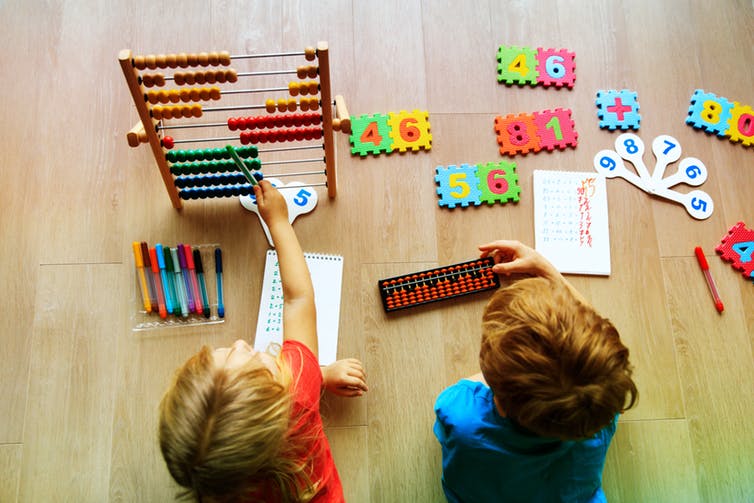 Maths can be fun – if only it’s taught properly.  Shutterstock

This guest blog was written by Alexei Vernitski, Ian Daly and Jake Bourgaize, University of Essex, for The Conversation.

It’s fair to say maths is not everyone’s favourite subject. In fact, for many people, the feelings of tension and anxiety that arise when trying to solve a mathematical problem can be all consuming. This is known as maths anxiety – and this feeling of being a failure at maths can affect people’s self-worth for years to come.

For those who suffer with maths anxiety, it can be difficult to shift from a mindset of failure to a more positive outlook when it comes to dealing with numbers. This is why, for many people, maths anxiety can become a lifelong issue.

Maths can be fun – if only it’s taught properly.  Shutterstock
But research shows that if teachers tackle maths anxiety in the classroom and encourage children to try to approach a problem in a different way – by shifting their mindset – this can be an empowering experience. This is especially the case for pupils from a disadvantaged background.

US psychology professor, Carol Dweck, came up with the idea of “mindset theory”. Dweck realised that people can often be categorised into two groups, those who believe they are bad at something and cannot change, and those who believe their abilities can grow and improve.

But while this all sounds well and good, one of the issues with mindset theory is that it is often presented in terms of brain plasticity or the brain’s ability to grow. This has lead to complaints about a shortage of neurological evidence supporting mindset theory. Our latest research aimed to address this lack of neurological research.

Generally speaking, for every problem in mathematics there is more than one way to solve it. If someone asks you what three multiplied by four is, you can calculate the answer either as 4+4+4 or as 3+3+3+3, depending on your preference. But if you have not developed sufficient mathematical maturity or have maths anxiety, it can prevent you from seeing multiple ways of solving problems. But our new study shows that a “growth mindset” can make maths anxiety a thing of the past.

In our research, we phrased questions in different ways to assess how question structure may affect both our participants’ ability to answer the questions and their motivation while tackling maths problems.

Each question appeared in two formats: one of typical mathematical teaching and another adhering to the recommendations of mathematical mindset theory. Both questions asked essentially the same question and had the same answer, like in the following simplified example:

The first is that participants’ motivation was greater when solving mathematical mindset versions of problems compared to the standard versions – as measured by their brain response when solving the problems. It is assumed this is because the mathematical mindset wording encourages students to treat numbers as points in the space and manipulate spatial constructions.

The second is that participants’ subjective reports of motivation were significantly decreased after attempting the more standard maths questions.

Our research is immediately actionable in that it shows how opening up problems so that there are multiple methods to solving them, or adding a visual component, allows learning to become an empowering experience for all students.

So for people with maths anxiety, you will be relieved to know that you are not innately “bad” at maths and your ability is not fixed. It is actually just a bad habit you have developed due to bad teaching. And the good news is, it can be reverted.

Work with algorithms to create robots

Use maths and physics to describe the atomic nucleus