Who will be the Royal Photographic Society’s Science Photographer of the Year? 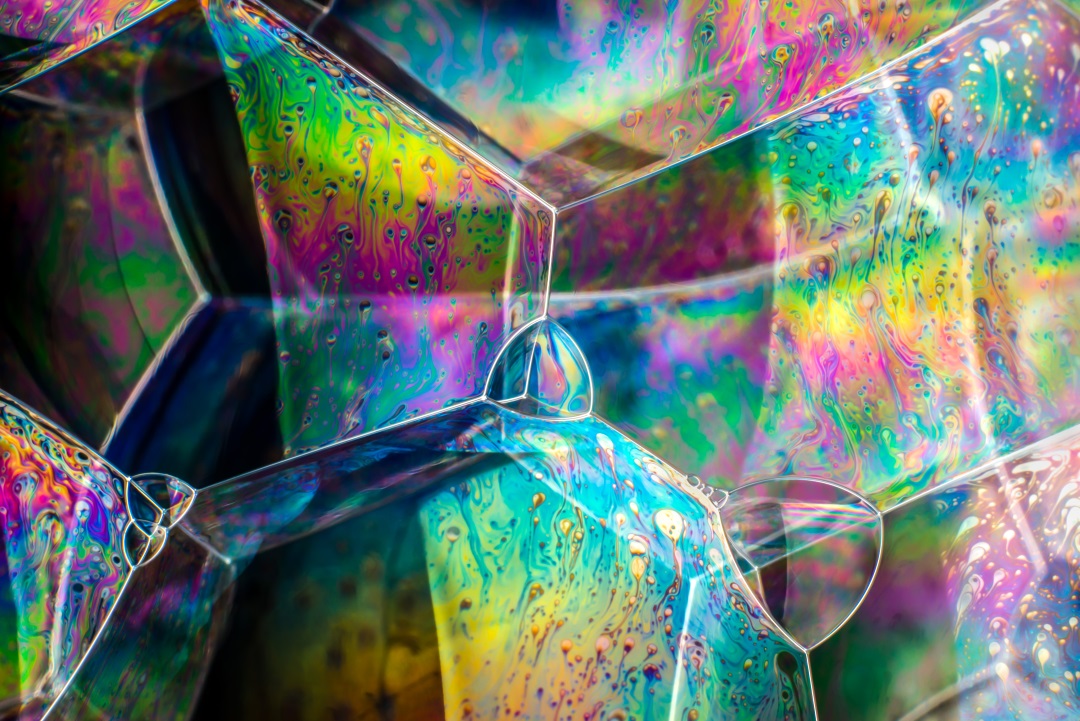 Science and art are like lab grown burgers and knickerbocker glories: they seem to require so many different skills and attributes to make, it’s difficult to imagine them being anything other than chalk and cheese. How many of you have been told you’re a born scientist or engineer? Or a natural musician and creative writer? How many of you have been told you can be an artist and a mathematician?

There’s a reason why STEM is morphing into STEAMM (science, technology, engineering, arts, maths and medicine), however. Increasingly, we’re realising that to be a scientist you need to be creative. Essentially, science needs artists, architects and designers – and photographers.

Science and art in pictures

Below is a snapshot of some of these shortlisted photographs. If you’d like to see more, the Science Museum in London, UK, will be exhibiting 70 of the images from 7 October, 2019 to 5 January, 2020.

“Science has always been integral to photography and photography remains essential to science as a tool for research and for communicating it to the public,” says Gary Evans, RPS Science Exhibition Coordinator – and we agree! 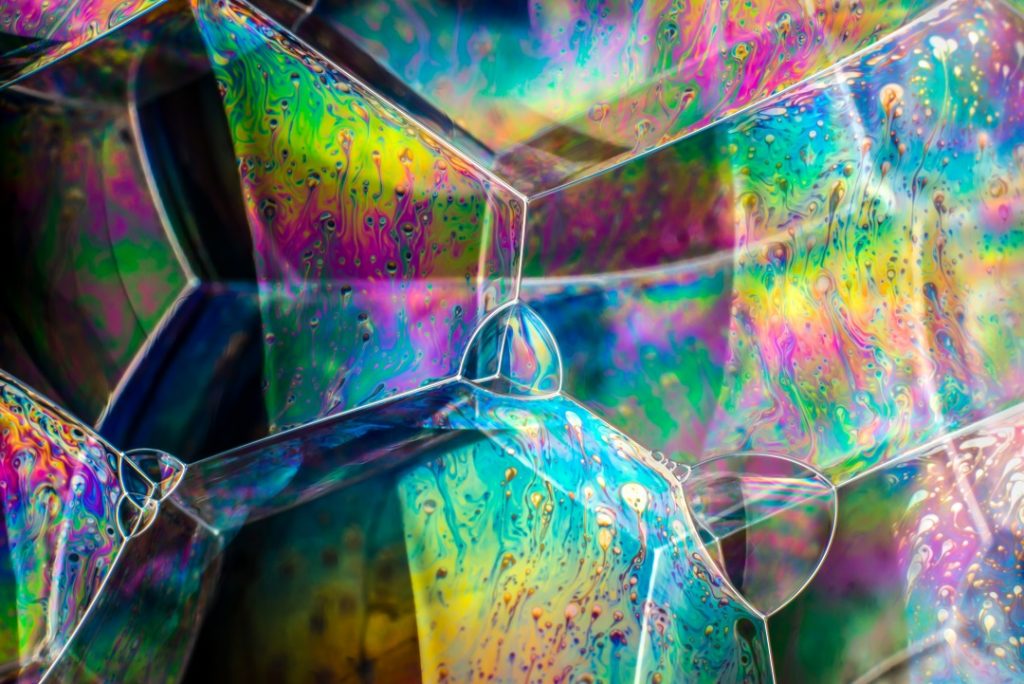 Kym Cox: Bubbles want to optimise space and minimise their surface area for a given volume of air. This unique phenomenon makes them a reliable, useful tool in many areas of research. In particular, materials science and “packing” – how things fit together. Bubble walls drain under gravity, thin at the top, thick at the bottom and interferes with travelling lightwaves to create bands of colour. Black spots show the wall is too thin for interference colours, indicating the bubble is about to burst! 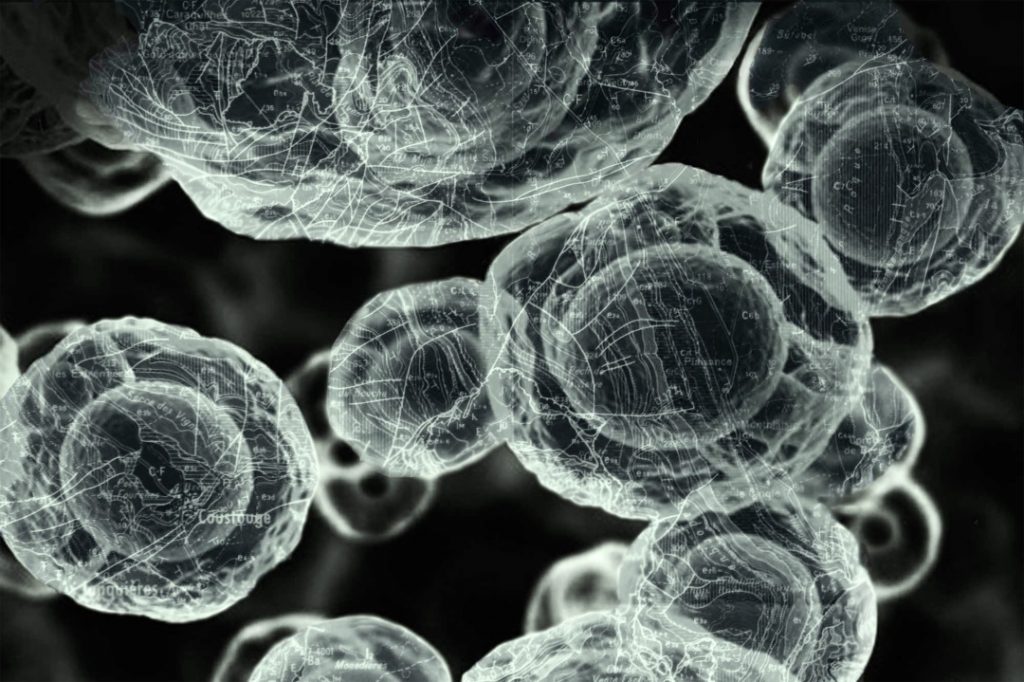 Yasmin Crawford: Final Major Project for an MA Photography Falmouth University.  Project: Mapping 1, Post Exertional Malaise. Mapping 1, focuses on discovering the research behind Myalgic Encephalomyelitis.  Through exploration of perspective, complexities, and scientific multidisciplinary collaborations, I create imagery that explains, reveals and connects us consciously to the ambiguous and unknown. 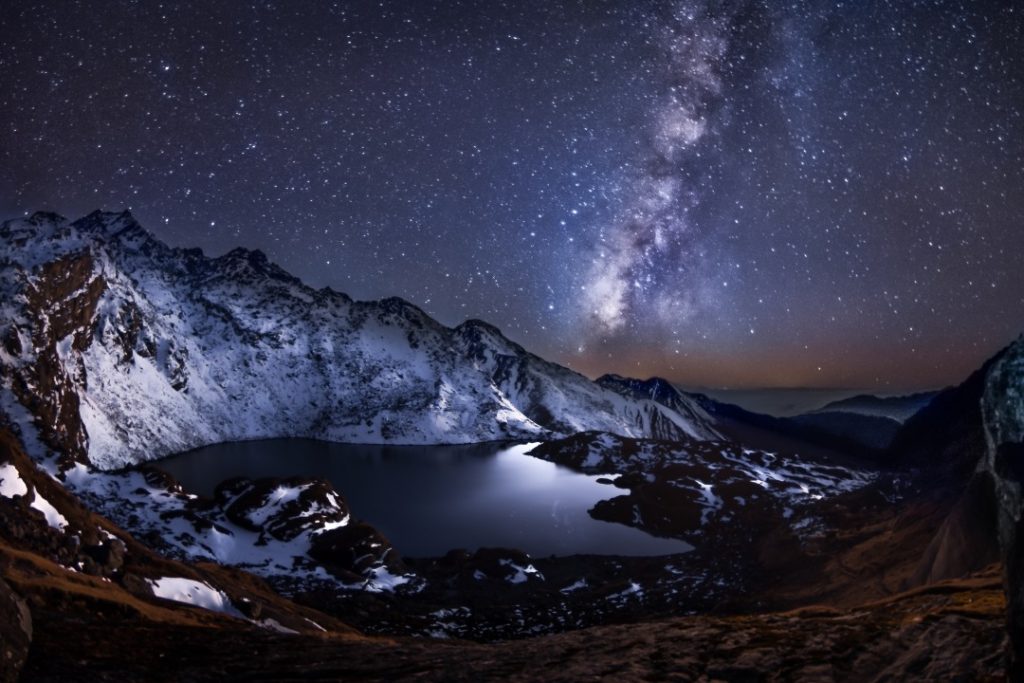 Yevhan Samuchenko: Himalayas mountains, Nepal. Gosaikunda high-mountain lake. Point of shooting – 4400m. The Milky Way is the galaxy that contains the Solar System, with the name describing the galaxy’s appearance from Earth: a hazy band of light seen in the night sky formed from stars that cannot be individually distinguished by the naked eye. The Milky Way is a barred spiral galaxy with a diameter between 150,000 and 200,000 light-years. It is estimated to contain 100‚400 billion stars. 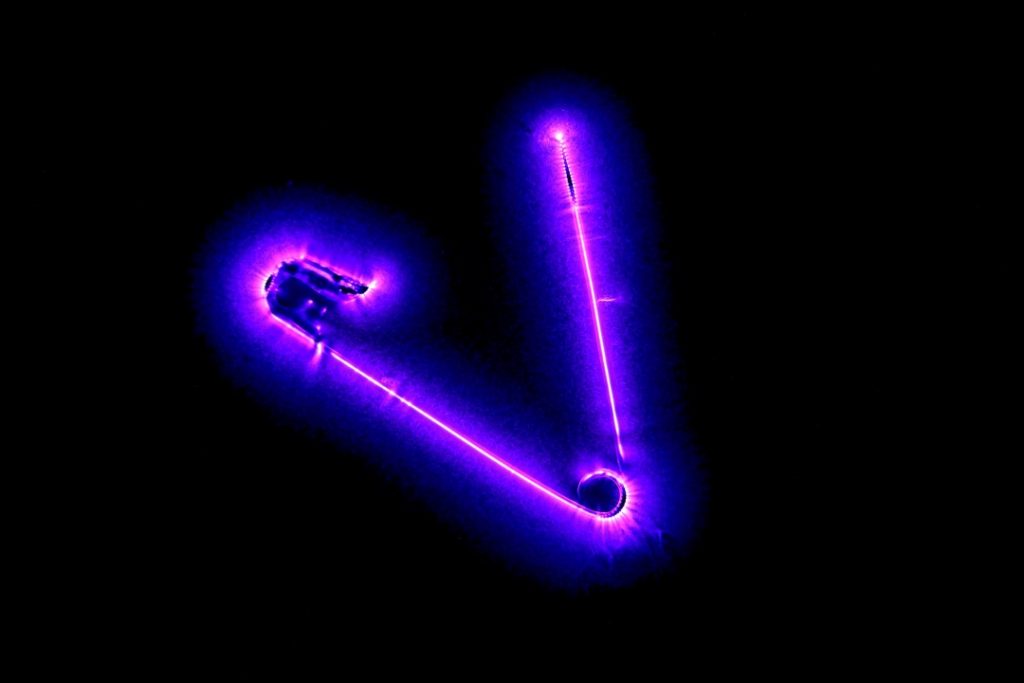 Richard Germain: A safety pin is connected to a high tension AC generator. The pin ionizes the air around it. When the electrons fall back on an atom, the excess energy is emitted as a photon, which generate the corona glow around the pin. The fuzziness of the pin is because the camera did not actually capture light reflected on the pin but rather the light emitted by the ionized light around it. 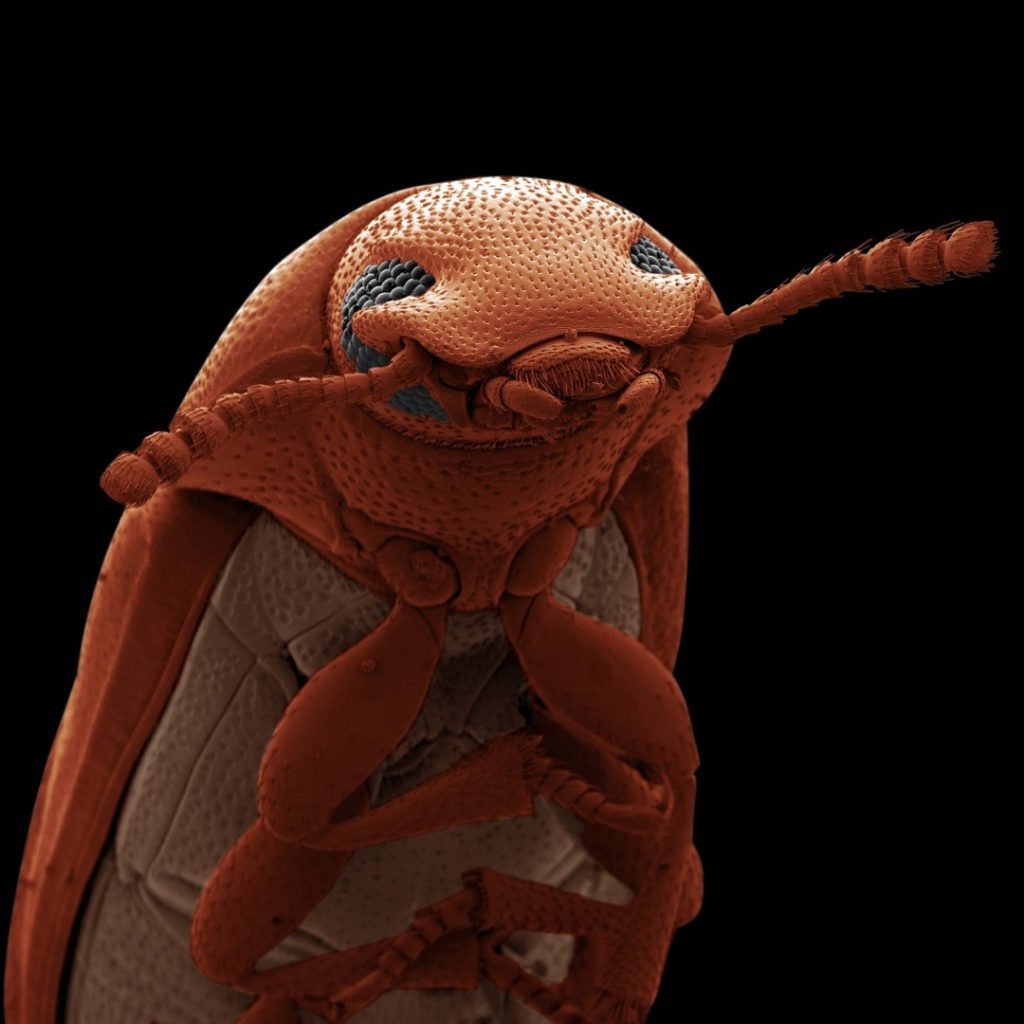 David Spears: This small beetle is a pest in stored grain and flour products. Scanning electron micrograph, coloured in Photoshop. 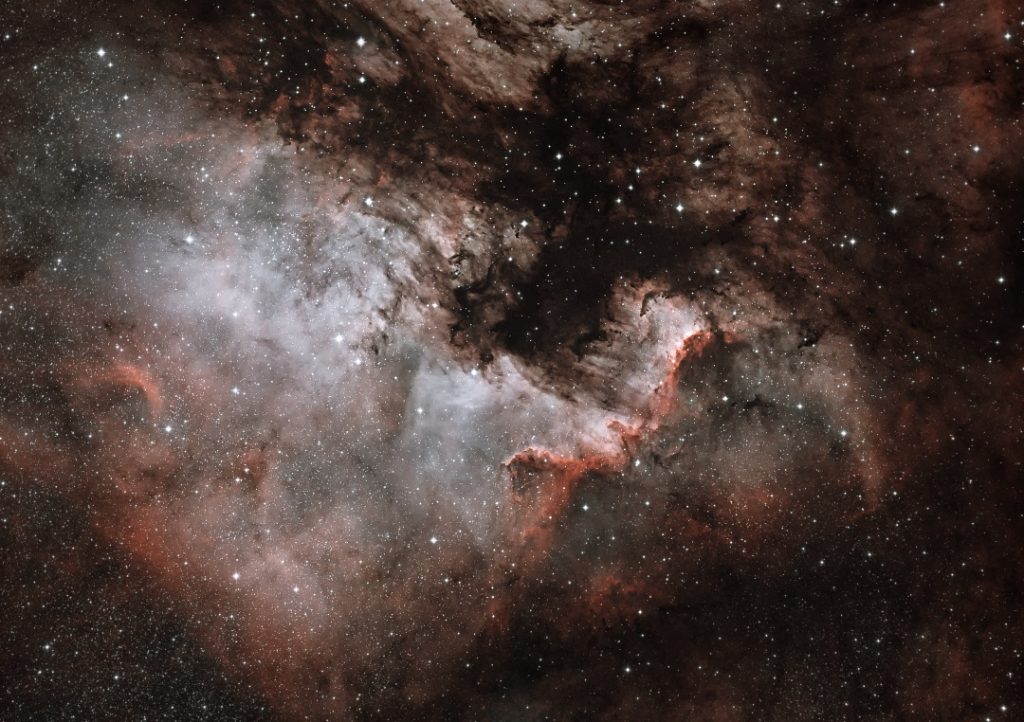 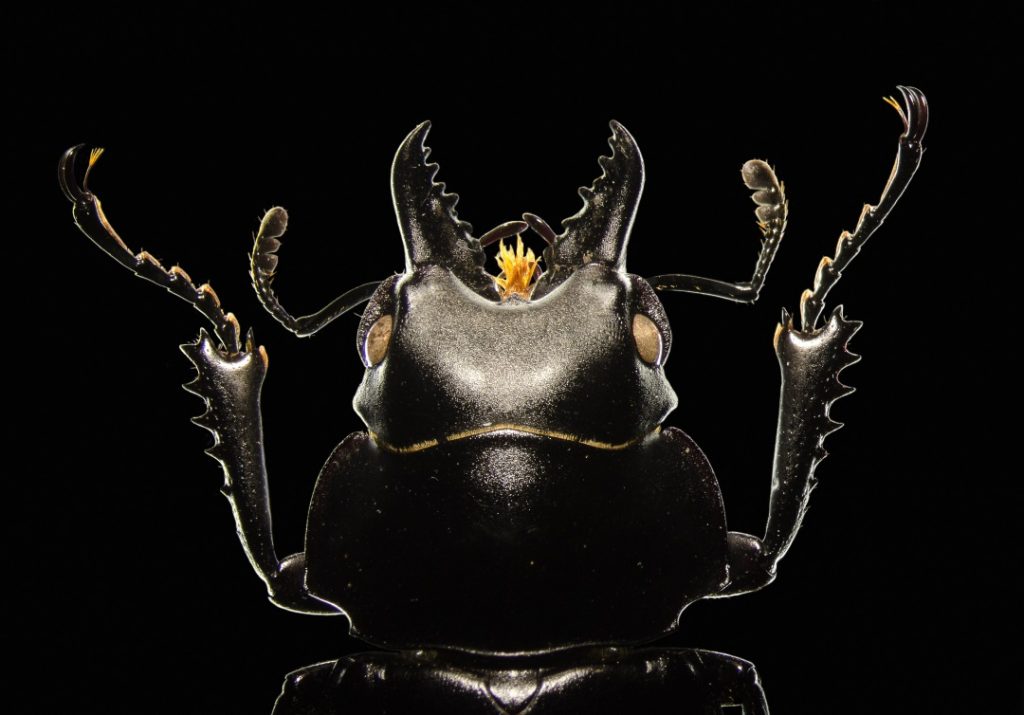 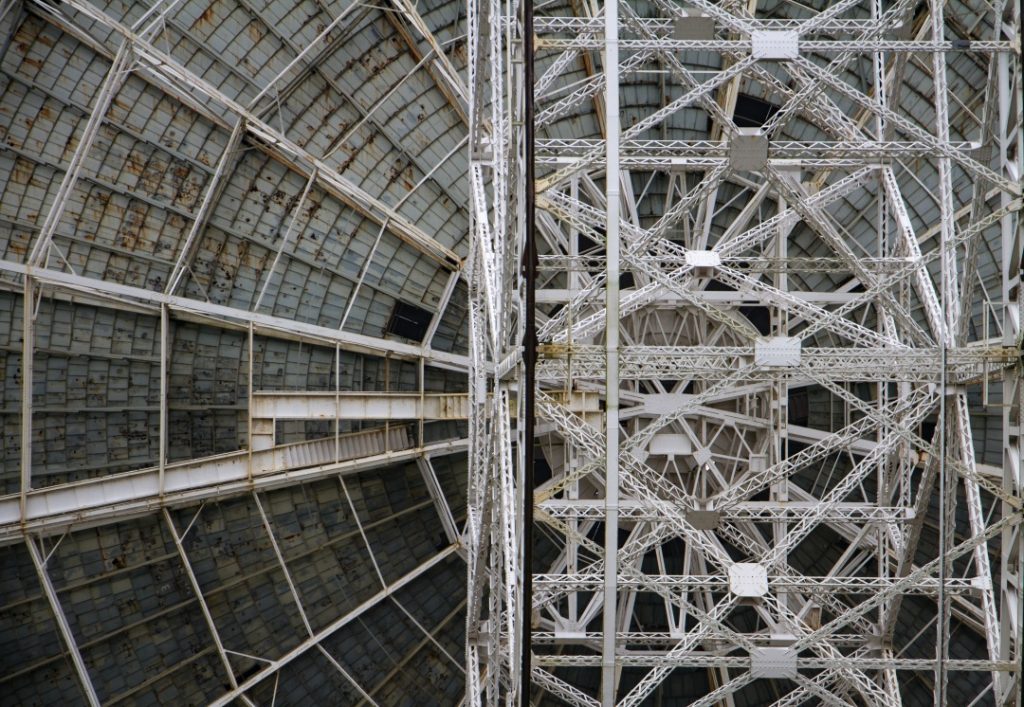 Marge Bradshaw: I have always been fascinated with the Lovell Telescope at Jodrell Bank since I went on a school trip as a child. Here, I wanted to take a series of closer, more detailed and more honest shots than we often see. Exploring the multitude of shapes and exposing the wear of the telescope, each photo in the series stands alone or can be viewed collectively‚ either way, they present a powerful portrayal of machine that helps humankind in their endeavours to understand space and time. 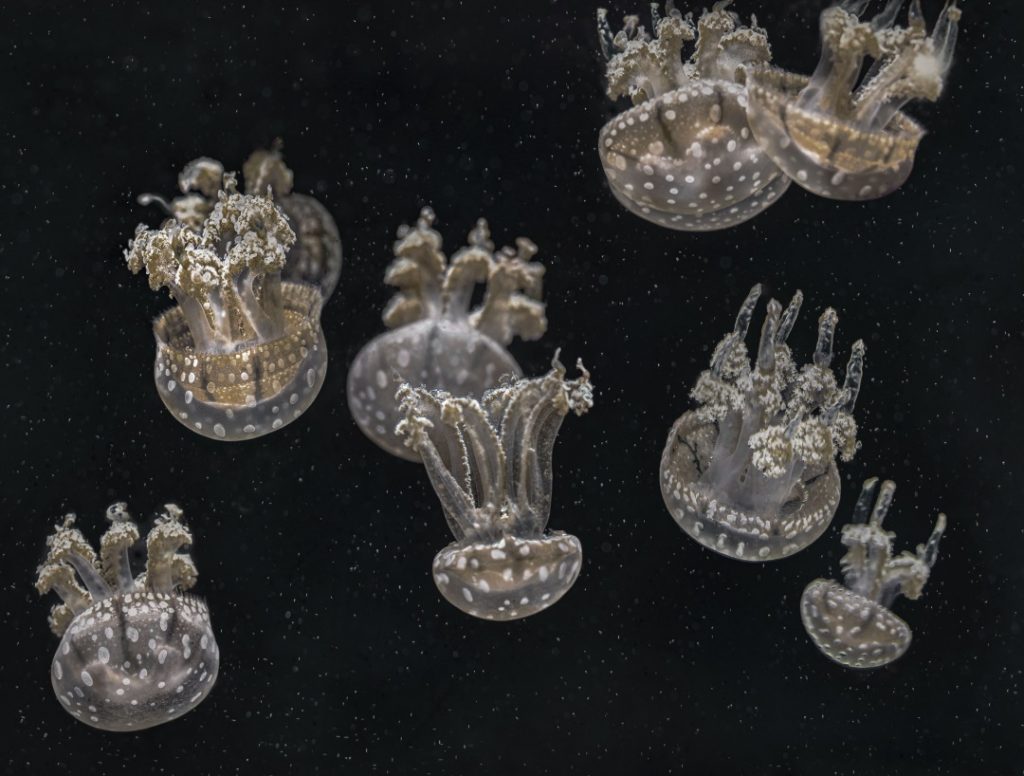 Mary Anne Chilton: Instead of swimming, this species of jellyfish spends its time pulsing up and down in the water. Their diet is sea plankton and their coloration comes from the uptake of algae in the water. Some jellyfish species have been documented eating plastics in the ocean. One theory suggests that algae grows on the plastic. As it breaks down, the algae creates the odour of dimethyl sulfide that attracts hungry animals.

Futurum Careers: A working-class hero is something to be