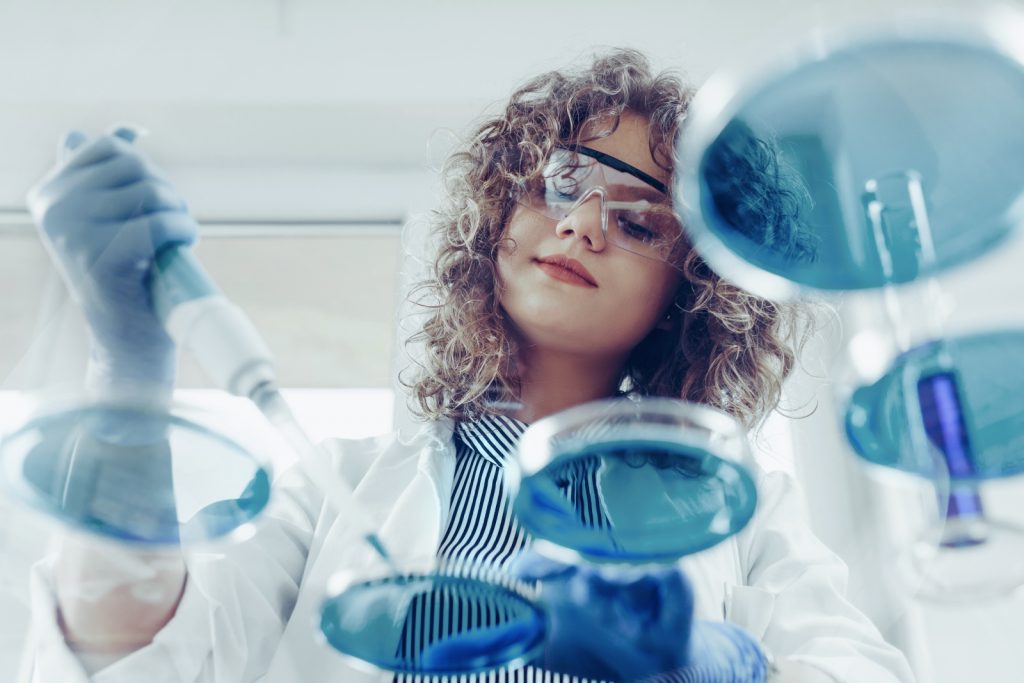 In our latest issue of Futurum, we spoke to individuals and organisations working to increase the representation of women in STEM, both in education and in careers. In this blog post, we introduce more inspirational women working in STEM fields.

In 2018, a study1 of 1.6 million students from around the world revealed that, on average, girls outperform boys in STEM subjects at school. Despite this, women are underrepresented in STEM, both in higher education and in the workplace.

In the UK, only 35%2 of all STEM students at university are women. The statistics for computer science, engineering and technology degrees are shockingly low, with women comprising only 19%2 of students. While STEM degrees are dominated by men, STEM jobs are even more so. In 2019, women made up only 24%2 of the STEM workforce in the UK and 27%3 in the US. And, as you travel higher up the corporate ladder, women become fewer still. Only 3%4 of STEM industry CEOs are women. Yes, only 3%.

While there are many reasons for the underrepresentation of women in STEM (such as unconscious bias, gender discrimination, motherhood posing greater challenges to career advancement than fatherhood, etc.), a lack of role models for the next generation is a key factor. If girls and young women don’t see themselves represented in STEM roles, they are less likely to aspire to STEM careers. So, here are some inspirational women role models who are leaders in their respective STEM fields and organisations.

For some examples of inspiring women leaders in STEM, the Healthcare Technology Report5 lists the top 25 women leaders in biotechnology companies. These leaders highlight not only the vital role women play in STEM, but the diversity of career pathways available for becoming a leader in a STEM organisation.

For example, Dr Lea Hachigian is the Vice President of Be Biopharma6, a company she co-founded that is developing therapies from engineered B cells. With a PhD in molecular and cellular neuroscience, she was named by Forbes as one of their ’30 under 30’7 for her work in healthcare. Dr Nicole Wagner is CEO of LambdaVision8, a company developing the first protein-based artificial retinas to restore sight to people blinded by retinal degenerative diseases. The research she conducted during her PhD in molecular and cell biology formed the basis of LambdaVision’s work, and she is now developing artificial retinas in microgravity on the International Space Station, for which she won a Women in Aerospace outstanding achievement award.

The women on this list also highlight that a PhD in a STEM field is not a requirement for becoming a leader in STEM. Sofia Elizondo studied philosophy, politics and economics then business administration, and worked as a special advisor to the United Nations Global Compact before co-founding Brightseed9, a data company using artificial intelligence to identify plant molecules with beneficial properties for health. Swati Deshpande originally trained as a lawyer. She spent many years practicing law in the Supreme Court of India before becoming the CEO of Datar Cancer Genetics10, a company that is revolutionising cancer diagnostics and therapy.

At Futurum, we work with many inspirational women leading exciting and innovative STEM research projects. Dr Alice Alipour, a civil engineer, is leading a team of engineers from a range of disciplines to design buildings that can adjust their shape according to wind conditions. Professor Nicola Carslaw is a chemist, leading a project to investigate the impacts of cooking and cleaning on the air quality in homes, schools and workplaces. Dr Julie Bastarache is a physician-scientist, working both as a medical doctor in a hospital and as a research scientist in a lab, where she and her colleagues, Dr Lorraine Ware and Dr Ciara Shaver, are co-leading a team investigating causes and cures of lung conditions. As an agricultural scientist, Professor Mariana Rufino is leading an international team of researchers who are working with Kenyan farmers to prevent land degradation. Professor Joanna Collingwood is a biomedical engineer. She is leading a team of biologists, physicists and engineers who are studying the role trace metals in the brain play in the development of Alzheimer’s and Parkinson’s disease. By leading research projects in a range of STEM fields, these women are helping to address some of the greatest challenges facing society.

What could you achieve in a STEM career? Will you be a role model for the next generation?

Do you have a question for any of these researchers about their work or career pathways? Or for any of the other inspiring role models we work with at Futurum? If so, you can go to their article at www.futurumcareers.com/articles, scroll to the end and type your question. The researcher will reply!